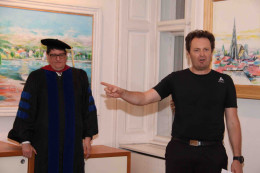 75 years ago, we saved your asses from the Nazis!

That’s right, Dr. Weeks and me!

We take personal credit for that.  (Even though we hadn’t been born yet.)

We love to hit your beaches, … and your bitches!

Vlad is the artist, who paints the Croatian coast the most.

Croatia isn’t just the movie-set backdrop to Game of Thrones and Winnetou.

It’s the Adriatic Riviera, my California away from home.

No matter how hard I try, I can’t pronounce your words!

Why can’t you Croats learn to use some vowels?

I’ve met a lot of Croatians in my time, but none of them were sober.

Croatians have convinced me you can drink PIVO from plastic bottles: Karlovacko and Ozusko, but I refuse to drink your PIPI!

That yellow soda from Split, from Pipi Langstrumpf.

Pipi Langstrumpf is how you say condom in German.

If you combine D-Day with V-Day, you get VD-Day!

Venereal Disease, VD is what you get if you don’t wear a condom on VE-Day:

Speaking of VD, let’s talk about Vla-do and his art!

with a glass of Plavac or Zlahtina or Pivo in your hand,

and a plate of fried sardines or calamari at your fork.

Vlado’s pastels make us warm and fuzzy around the edges,

his paintings express his yearning for the sea, they take us to Croatia,

which is why restaurants and art collectors buy his works,

they capture the Mediterranean lifestyle: eating a lot, drinking a lot, and fucking a little in between.

His paintings capture the Adriatic flair:

make you feel like a Roman soldier resting in the shade, terraced hills, white-stone houses with orange terra-cotta rooves, boats bobbing in the harbor of former Venetian ports.

He paints seagulls, and wishes he were a Galeb: those young Croatian men called „seagulls“, who wait around to fuck tourist women.

Greg and I are honored to be Vlad’s guinea pigs for portrait painting,

You really captured that dumb-American smile!

Why don’t you paint your self-portrait, Vlado?

Vlad paints where we want to be: on the promenade, at the water’s edge,

He paints the Croatian seaside more colorful than it is.

and takes his artistic inspiration from the Fauvists,

These wild impressionist beasts include Matisse, Cezanne, and Gaugin, but Vlado walks more in the drunken whore-mongering footsteps of Vincent van Gogh, and Toulouse-Lautrec.  He’s mastered the drinking and womanizing, now he just has to cut off one of his ears.

Vlado drives a BIG BLACK HUMMER to transport his paintings,

but really it is a leather couch on wheels, ein Schlampenschlepper,

for picking up women with big asses.

He finds it amusing to watch a woman try to exit his Hummer in high heels,

when she misses the foot step, and falls like a sack.

hogging up the road,

growling down the highway

in his big, black, BEAST

In town it’s a real head-turner,

afraid to cross the street,

Men just stare at the Hummer,

women look to see who this asshole is,

then they realize he’s Boris Yeltsin driving a tank.

A Croatian policeman salutes him, stops him and asks:

„Have you had anything to drink?“

Vlad says „If you ask me, I didn’t have anything to drink.“

„How much gas does she use?“

„She guzzles more than me!“

„Do you have a cannon for the top?

The officer lets us go,

We drive, and then we drink our way up and down the Croatian coast.

We go roving through Rovinj,

and lodging in Losinj,

strolling the Stradun in Dubrovnik

And Hwar is vis-a-vis Vis

We’ve got Zadar on our radar

Let’s Split before we get Rab!

Some Croatian towns and islands sound like pretty women you wanna fuck:

Not every Croatian town can look and sound beautiful:

Do you know the town Pula means „dick“ in Romanian?

That’s why it hangs off the end of the Istrian peninsula.

Potpis is Croatian for „signature“,

which is why Vlado signs his piss-pot potpis Perkovic on all his paintings,

Vlad is becoming a master painter, just look at his masterpieces of Rab & Dubrovnik!

(by Jeff Crowder the Cali-Wiener)

His language company is Excellence in English,

and he is the author of THE ENGLISH DRILLBOOK:

As Cali-Wiener he performs stand-up comedy in Vienna, Austria.

Although he doesn't yet speak much Croatian, he is regularly asked

to speak at Croatian cultural events, and his connections to